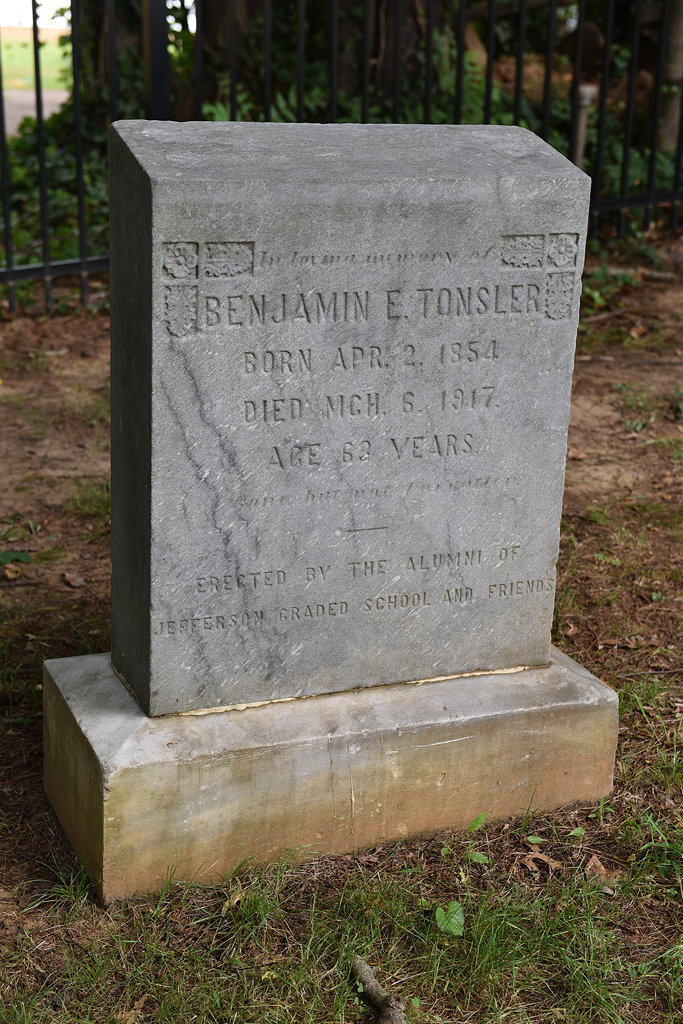 Benjamin E. Tonsler is one of the most prominent figures in Charlottesville history, a civic leader who led the fight to educate African-American children. Historical documentation on his early life is very scarce. We know he was born April 2, 1854; it is not known whether he was born into an enslaved or free family. His descendants believe he was employed or enslaved by a University of Virginia professor, who may be the one who taught him to read and write. He graduated from Hampton Institute and returned to Charlottesville as a teacher for the Jefferson Graded School, at the time the only school for African-American students in the city.

Tonsler’s legacy is embedded in the landscape of Charlottesville, both at his longtime home on Sixth Street SW, which is on the National Register for Historic Places, and at the city park on Cherry Avenue named in his honor. He rests in the Daughters of Zion cemetery beside his wife, Fannie Gildersleeve Tonsler, and near other relatives of the Tonsler, Heiskell, and Buckner families.

Benjamin Tonsler’s gravestone monument reads “Erected by the Alumni of the Jefferson Graded School and Friends,” a permanent testament to his role in educating generations of young African Americans.

After a few years of teaching, Tonsler became principal of the Jefferson Graded School, a role which he filled for almost thirty years. Tonsler dedicated his life to advocating for the education and enrichment of his students. At a time when it was illegal for African-American students to study past the eighth grade, for example, Tonsler held classes for older students in secret after the school day was done.

“We received a quality education at Jefferson School. Professor Tonsler taught accelerated courses along with the regular curriculum. He taught us ancient history, Emerson and Bender Language, and high mathematics. Our parents bought us extra text-books, as well as those required by the Charlottesville School Board. He put the extra books out of sight whenever the superintendent visited the school.”

“The Fifeville and Tonsler Neighborhood Historic District encompasses 264 contributing buildings and 3 contributing sites. Fifeville is a historically African American residential neighborhood and was developed between 1890 and the 1930s. The Benjamin Tonsler House, ca. 1879, combines the Italianate, Second Empire, and Gothic Revival architectural styles. Tonsler, a graduate of Hampton University and friend of Booker T. Washington, went on to become principal of Jefferson School and is remembered as one of Charlottesville’s leading educators.” — Preservation Piedmont on Facebook, July 29, 2020